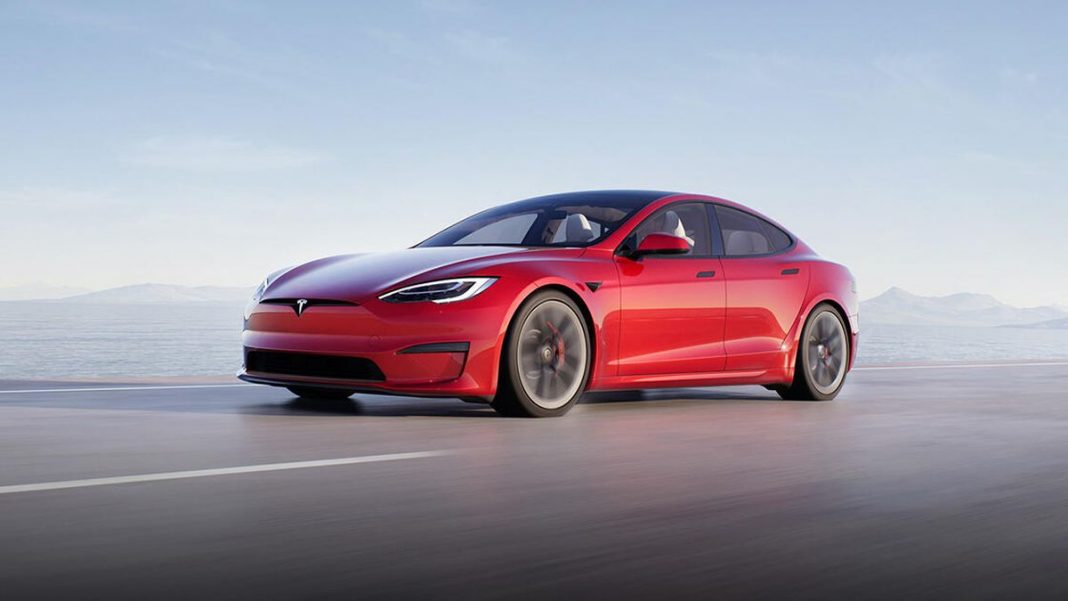 If you’ve ever watched the movie, ‘Spaceballs’ by Mel Gibson, then you’ll get the reference behind Tesla’s new catchphrase for their latest release of what could possibly be the ultimate bad-ass in electric vehicle history. Forget about the Plus! According to Elon Musk, CEO of Tesla and resident bad boy techie, Tesla’s newest Model S Sedan is so ‘ludicrous’, they had to give it a name upgrade! Ladies and gentlemen, I’d like to introduce you to the Model S Plaid.

“0 to 60mph in under 2 secs. Quickest production car ever made of any kind. Has to be felt to be believed.”

What’s even more exciting is that on June 10th, 2021, 7pm Pacific, Tesla will be streaming LIVE their Model S Plaid delivery event at their Fremont factory and we’ll get to see its unveiling in all its sumptuous glory.

Now I’ve been doing a little digging into what makes this car so different from all the other EV’s out there and let me tell you, my research did not disappoint. This car is seriously in a league of its own! In fact, when Elon Musk released a video recently of the ‘Plaid’ version of Tesla’s Model S sedan, he was quoted as calling it a ‘step up from its Ludicrous’ model. What exactly does this mean? Let me break it down to you.

The Model S Ludicrous goes from 0-60mph in just 2.4 seconds. The Model S Plaid goes from 0-60mph in UNDER 2 seconds flat! In fact, in the video released by Elon Musk, the ‘Plaid’ debuted last September at the Laguna Seca raceway where it ran the course in 1 minute and 36 seconds, making it the fastest electronic vehicle in production to date! They said the Ludicrous Mode was “not for the light-hearted”, but this new Plaid powertrain is definitely not for the faint of heart! This car is serious power on four wheels! But lets take an even closer look at what buyers can expect from this beast.

Tesla’s website shows the specs on the Model S Plaid having a range between charges of 390 and 412 miles (although some say it might actually be 520 miles), with a top speed of 200mph. Said to have the longest range and quickest acceleration of any electric vehicle in production, this Model S Plaid is quite possibly the highest performing sedan that has ever been built. And that’s saying a lot! But there’s more!

Again, according to Tesla’s website, both the long range and Plaid powertrains have updated battery architecture making it possible for the Model S Plaid to run back to back, consistent ¼ mile trips. The combination of the long range and plaid platforms also allows for a unification of powertrain and battery technologies resulting in what has been dubbed ‘unrivaled performance, range and efficiency”. The new module and pack thermal architecture of the Model S Plaid also allows for faster charging which in turn provides greater power and endurance in almost any condition. It was also noted that the new design allowed for what is called the ‘the lowest drag coefficient on earth’ resulting in a level of efficiency previously unheard of in electric vehicles. To say the Model S Plaid was built for speed and range would be a definite understatement! This car is next level!

Another fantastic change from its predecessor is the fact that this model S has a much wider body and chassis which goes a really long way in helping you down straightways and around corners much faster than previously done. When you watch the video posted from its debut on the Leguna Seca raceway, this is very clearly evident. The car handled those corners so cleanly it was practically ridiculous! Or should I say ‘ludicrous’! The fact that the new changes also allowed for farther travel times between charging makes this car a must have for all you roadsters, and even if you aren’t someone who likes to do long road trips, this car will make you change your mind! Did I mention they said its the only electric vehicle to date that can travel farther on a single charge? Meaning you’ll spend less time charging and more time driving. Yeh! That’s how bad-ass this Model S Plaid is. Did I not say this car was next level!

Another fun fact about Elon Musk’s latest toy gem. The Model S Plaid is built from the ground up meaning every aspect and element of this car is purely electric. Combined with its high-strength architecture and floor-mounted battery pack, the Model S provides the ultimate in occupant protection as well as an excellent low rollover risk. Simply put, this car will sit on the road! As with all Model S vehicles in Tesla’s production line, the ‘Plaid’ comes with Tesla’s latest active safety features which include Automatic Emergency Braking (AEB) at no extra cost, which quite frankly is a huge bonus to have as a car owner, as well as Autopilot, which allows you to enable your car to perform tasks such as steering, accelerating and braking automatically within its lane. All under your supervision of course.

Some other cool features include: Rear, side and forward-facing cameras that provide maximum visibility. Powerful visual processing at up to 250 meters of range. Detection of nearby cars which help prevent potential collisions and also assistance with parking. The attention to detail on every line and element of this Model S makes it the most aerodynamic production car in existence. With the right tires on this bad boy, this car will stay firmly planted on the road no matter how fast you drive and no matter how many twists and turns you make.

With front and rear trunks as well as fold-flat seats, the Model S Plaid is considerably more than just a luxury car. You can transport pretty much anything, not just your luggage. The 22-speaker, 960-watt audio system with active noise canceling is considered the best audio system ever created. Definitely another plus in a long time of pluses for this model S! It also offers multi-device Bluetooth, wireless and USB-C charging capabilities for all passengers as well as fast charges for tablets and laptops. And if all of this hasn’t blown your mind away as yet, then dare I mention the up to 10 teraflops of processing power available for in-car gaming? Combine this with its wireless controller compatibility and you’ve got a car that will not only allow you to travel farther and faster than ever before, but you can game the entire journey without breaking an electrical sweat! Since teasing the ‘Plaid’ back in 2019, Elon Musk has stated that it would cost more than the company’s current offerings, but at a price tag of $139,990, and with all this Model S Plaid brings to the table, that’s a price worth paying. Plaid models will be available for delivery in late 2021.